Just in time for the races at Cycle Vision, Roelf completed the last item on the racing hood: the visor of polycarbonate, heated in an oven and pressed in a mold. This visor that can be pushed up or down to regulate the airflow makes an enormous difference to the racing hood I had before, that had a fixed visor right in front of my face. There was no way I could regulate the airflow other than to throw it off. 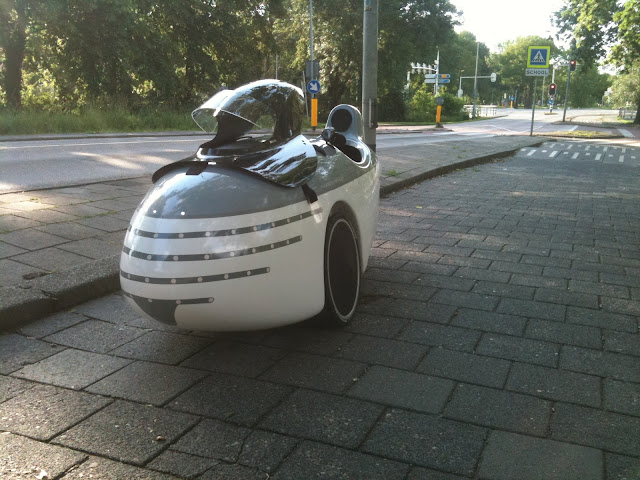 The opening for the head of the Sinner Hood is much longer, so I can lean forwards and have a look around. This gives a feeling of being less confined. It also means that the visor is further away so it doesn't fog up as quickly from my warm and moist breath. The visor is always a bit open to allow air travel along the back of it. This also helps preventing fogging up. When I get too hot, I simply open the visor a notch. The pivot is at such a place that the top of the visor never sticks out above the hood itself. That way the aerodynamic penalty for opening it is not very big. It's certainly better than overheating, because you have much less power when you're too hot.
Now to the praktice. It was about 29degrC. at the racetrack during the Three Hour Race. Would I survive under the hood or throw it in a ditch after a few laps, because it'd get too hot. I was amazed to find that it was actually pretty cool. The airflow went right to my forehead, cooling my head. That was certainly neccessary because the track is a bit narrow for so many racers and spectacular corners. Some were tight at the end and the chicane was tricky, but I found that none of them would have to be slower than 40km/h. That chicane right after the start was very nice. After a few laps I felt confident enough to fully unload one wheel of the Mango and let it fly over the grass in the first corner and to speed up when coming out of the second corner while the unloaded wheel bumped slightly up and down on the pavement because of my hard pedalling to get up to speed again. My Garmin Edge800 was very helpful to determine the maximum approaching speed towards the corners and when it was time to start pedalling again. The Edge also has a thermometer. I didn't look at those digits during the race but in hindsight it is nice to see how warm it gets under the hood, standing still in the burning sun and how much it cools down when travelling some 44km/h on average. The temperature even got lower than the outside temperature. I think, especially because I had no sun burning on a helmet, that I was even cooler than the lowracer riders.

You can see that at the start the temperature was 34degrC. inside the Mango and under the hood but after 10 minutes into the race it went down to 26, even 25 which was about 3 degr. lower than the air temperature. Mind you, the position of the thermometer is not in the airflow but my face sure is, so the cooling effect is very good. After 1.30hours there is an increase in temperature, because I had stopped, walked back to the start line to get a tube and fix the blown out tire (I had another one at the end of the race, geez).  Temperature and other data of the race can be viewed here on Garmin Connect.
The curves in the track: 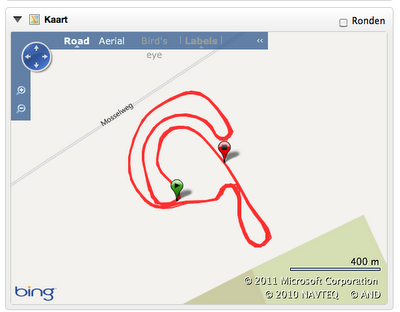 Part of the way home after the races, half of it in the dark, I also had the hood on. Now that the heat and fogging up is no longer a problem anymore, it's almost practicle for everyday use, but not quite. Vision to the rear is somewhat impaired so it should be possible to quickly dismount it when riding in city and urban area. It'd like it to be as easy as stuffing the foam cover in the nose of the Mango. This is something to work on.
Gepost door Harry Lieben op 09:27