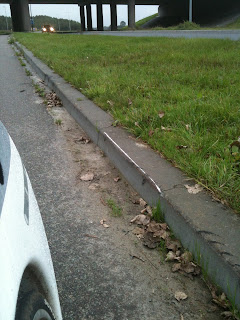 A white stripe on the curb.... what can it mean. Well it means that I was uncareful on my commute and flipped my Mango Sport in a corner that I must have gone through hundreds of times. The white and grey on the street is the polyester coating, so I guess you could say that I lightened my velomobile some more. 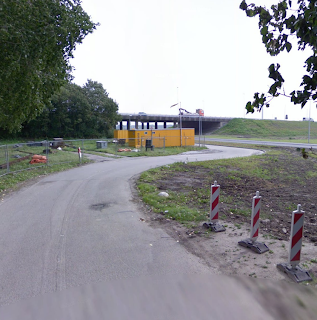 This is a Streetview photo from googlemaps of the site. The container is no longer there and the street has new asphalt, so conditions are perfect to train my cornering abilities. I know that I can go in with about 35km/h here and still have a speed of 30km/h when I get out  of these corners. In a race, the speed with which you leave a corner is the most important: the more you are slowed down, the harder you have to work on the straights to get up to speed again. Another rule of thumb: "no breaking, steer!" 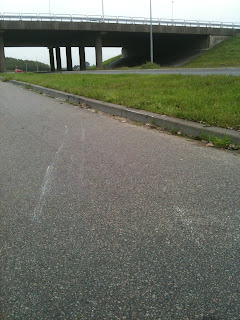 These are longer gelcoat stripes.....
So how did it happen? I know this corner well, but the conditions were unfavourable. I had a slick Comp Pool tyre at the back because there had been a race the sunday before. It doesn't have as much grip as the tyre I usually use. On top of that, it was drizzling a bit. The corner to the right was no problem, but I felt that I was going a bit quicker than usual and decided that I would have to steer harder to the left. So I did, but I immediately lost grip with my back wheel so I skidded sideways. Somehow the tyre found grip again and that was why the Mango tipped. 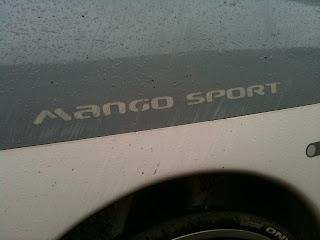 You can see in this picture that not only the right side has scratches, but also the left side. I must have made a full 360degrees flip. The fact that the top of my head felt a bit strange for a few days contributes to this theory. Yes, I wore a helmet..... 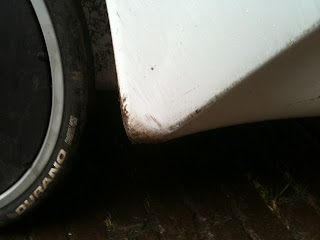 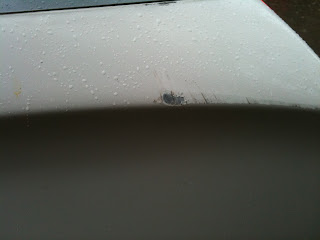 Gelcoat scraped right off here, so you can see the glass-fibre beneath. No structural damage has been done though. Some gel-coat, sanding paper and a polish and it will look ok again. 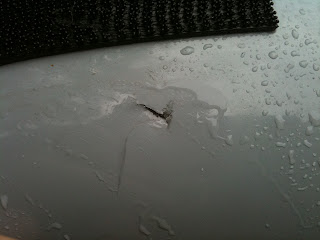 This is a bit more serious: the part behind the head hit something hard, maybe a sewer-lid, and cracked. There are two such small cracks and they can be fixed as well. 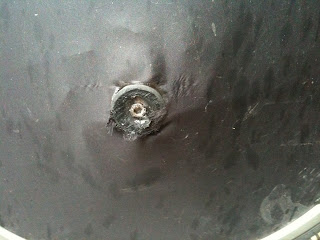 The wheel-cover and the plastic cap in the hub are "kaputt". I replaced them. 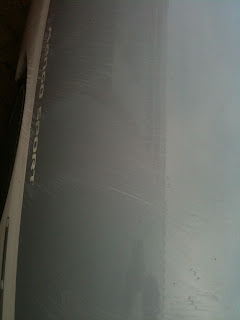 It was not until the next day, when the top was dry, that I saw that this also had a lot of tiny scratches. 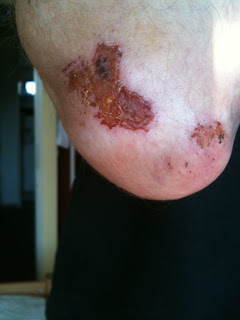 My right elbow, four days later. I braced myself against the inside of the shell, but when I fell over, the bump was so hard that my elbow moved over the glass-fibre. It's not deep and it doesn't hurt nearly as bad as it looks like.

After the Mango came to a stop,a guy on a scooter and a man on a hybrid bike stopped and informed if I was ok. I couldn't tell at first: I didn't feel a thing, so I checked my body. I found my elbow open, but apparantly it wasn't very deep. Than I thought of my beautiful Mango, it must be totally wrecked, I thought. Surprisingly I only found a heap of scratches all over the body. I was lucky this time....

The two men thought that the helmet had saved me. Well yeah, it had hit the ground and saved me from losing a few hairs, but what about the protection of the hull my dear friends!
Gepost door Harry Lieben op 06:17