This is the old shifter in my Quest, the Shimano compatible 9-speed SRAM Attack. It was working fine, even after 10.000km, but I wanted to change to a 10-speed system and an SRAM XX derailer with the typical 1:1 ratio, while the Shimano shifters operate at a 1:2 ratio. So I needed another shifter. There is a retention spring at the top of the photo that does the actual shifting, clicking into the 9 recessions in the body.
Note the long coil spring, bent around the shaft that you can barely see (covered in white grease) at the bottom of the photo. It's function is to give a bit of resistance to your hand while shifting, but also to ensure that the shifter does not accidentally shift because of the derailer spring that is constantly pulling on the cable. This pulling on the cable of the derailer spring is the reason why shifting to a smaller cog is lighter to do than shifting to a bigger cog.
When my hands are sweaty, I have so little grip on the gripshifter that I have to wear cycling gloves to be able to shift to bigger cogs. In a hilly time-trial I once wasn't able to shift for an hour because I forgot to put on my gloves. I was p*ssed!

This is the newly installed SEC shifter that I mentioned in an earlier post about lightweight components. Now you can see why it is lighter: no grease inside. Just kidding, but the SEC  is not made any more complicated or heavier than strictly necessary.
The basic principle of the two shifters are alike, but there are some differences. First, SEC doesn't have the long coil spring around the shaft, so it depends solely on the retention spring to counter the constant force of the derailer spring.
A second difference is that the recessions are not made in the outer body of the shifter. Instead there is a separate white part that you can take out. That is a smart idea of SEC: they only had to make one body cast for different systems. 8-, 9-, or 10-speed, Shimano or SRAM compatible, it's all the same shifter. The only thing they need to do at the factory is to mount the appropriate white part that has the recessions that you need for your system. The odd thing in this is that the SRAM compatible version is more expensive than the Shimano compatible. It's just marketing.......
This retention spring of the SEC shifter is much stiffer (shorter and thicker) than that of the SRAM. Still the shifting is much lighter, so I don't need cycling gloves anymore.
How this shifter will hold up in the long run? We'll see....

NB: the reasons for changing to a 10-speed system is because I want the steps to be as small as possible, while retaining the total range. Why not have 11-speed than? Campagnolo has it, but the price tag simply becomes to hefty for me and the derailers and cassettes of Campagnolo do not give the wide range that I want.

If you want to make a bike lighter then you will need to look at all the components. But the bike has to perform well also, so sometimes it is better not to push to the limit. We have an interesting choice when it comes to the shifters: either I choose very good performance or I can choose the lowest in weight... 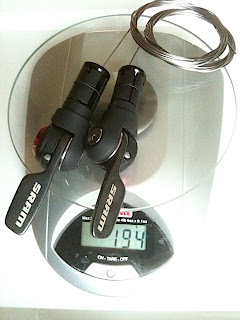 This is the 500TT shifter from SRAM. It is compatible with my X0 shifter since it pulls cable length at the 1:1 ratio that the derailer is designed for. Not compatible with Shimano components. Price is 112euro. It's not a very common component, so I didn't bother looking around for a lower price too much.
Thumb shifters in a Quest are unusual, but I have used Shimano Ultegra thumb shifters in my Mango Sport and I'm very pleased with the accurucy and ease of shifting. The steer in Mango and Quest are the same, so I see no reason why it wouldn't work.
It is not particularly light at 194gramm, but still some 20gramm lighter than the standard X9 gripshifters that come with the Quest. I could have bought the 900TT, but it's only 16 gramm lighter and costs some 40 euro more. Most probably both working equally well, so it's not worth the extra bucks. 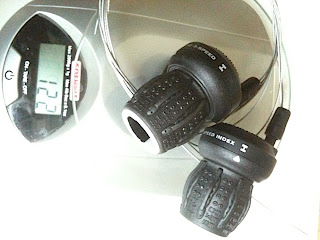 This is a cheaper shifter at 63 euro incl. shipping (found it even cheaper later on at http://luckynino.blogspot.com, tip from Jeroen Koeleman). At the moment it is the only production 10-speed gripshift and it was only by accident that I saw them on the site of the lightweight cassette manufacturer RECON. The SEC S-light 10-speed shifter comes in a version for SRAM XX derailers and a slightly cheaper version for Shimano derailers. Their weight is minimal and also much lighter than the SRAM gripshifters. We had a Shimano type SEC shifter installed on a bike at work. My first impression was that it shifts precise enough, but very very light and not consistent in all the gears. When I made a testride, I sometimes upshifted unwillingly two gears at a time. Maybe it's something to get used to, we'll see.
The low weight is tempting, so I will try these first. If I find these shifters to be ok, I might sell the 500TT shifters. 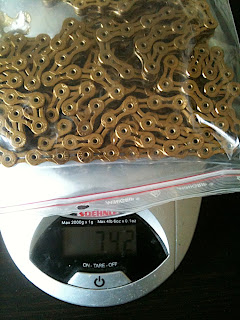 I'm becoming more and more of a weight weenie, it's becoming a bit of an obsession.... That may be a bit strange for a flatlander, but I find the handling and ease of acceleration of a light velomobile so much superior, that I've decided to spend some time and money to find out how to make a lighter Quest (my Mango Sport already has lightweight components) without sacrificing any of the practical features. It's no use to have a lightweight velomobile when it's components are to weak, right? There are plenty of exceptions to the rule that lighter is weaker however. Take the KMC X10SL chain: it is tougher than most heavier chains and the Ti-N coating makes for less wear and better shifting. There are three typical racing-bike lengths lying on my kitchen scale here, that's about how much I need for a Quest. One length of 114 links is 742:3=247 grams. That includes a 'missing link".  I found a cheap webshop that doesn't sell the chain one length at a time in a nice package, but straight from the roll. It was 105 euro (shipping included) and that saved me 40 euros from the cheapest eBay seller!? Another nice thing: I don't have to link the three chains.
But what about the weight reduction? Well that depends what quality chain you compare with, but even when compared to other light 10-speed chains, this one gives me about 120gramms reduction. 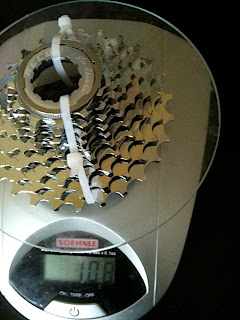 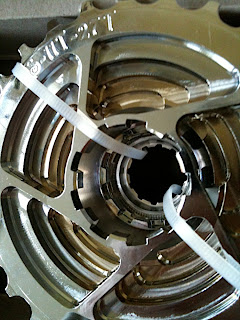 Chains run over a cassette and RECON makes the lightest of them all. 108 gramm for an 11-27 10-speed cassette is amazing. They usually don't come cheap and they are hard to find. A Taiwanese seller said to have some for less than 100euro but after ordering it appeared to be out of stock. I got a full refund, no problem but no cassette either. I even e-mailed the manufacturer in Taiwan and he replied very correctly that an Italian reseller had all possible cassettes from RECON. But I don't want all, I just want the cheapest 11-27! So I looked around again with google and finally found a shop at the other side of the ocean that had my size for 130 euro (incl. shipping). That's a lot of money for a cassette that wears and will have to be replaced. The enclosed drivetrain ensures a long life I reckon. Light cassettes from SRAM and Shimano are mostly twice the weight of this one and are pretty expensive nonetheless. That's why I chose this one, giving me the greatest bang for the buck.
The reason that these cassettes are so light is that they were CNC fraised out of a solid piece of aluminium. Everything unneccesary is simply "grinded" away, like Apple is doing with the aluminium frame of the MacBook, making it stiffer then when made of seperate small parts bolted together. Aluminium is not very wear-resistant, but the ceramic coating should help. I have had a RECON 12-23 cassette on my Mango Sport for about 2000km now and see no wear so far, so I'm pretty confident it won't wear before the chain does. (edit: I have paid way too much, you can find RECON cassettes on the blogspot of luckynino, tip from Jeroen Koeleman for 50euro excl. shipping) 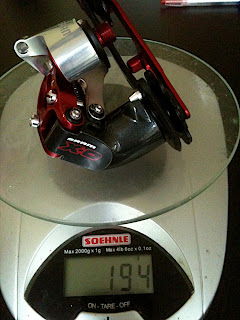 The derailer I chose is the X0 SRAM with medium cage. They have a very good reputation and I have good experiences with the X5 that has the same construction. I could get a good deal on Marktplaats from a bicycle mechanic. It's brand new and he wanted 20euro below the normal price of about 160 euro, but looking at eBay I found one seller that was significantly cheaper at 117euro. I confronted the man with this fact and after some tough negotiating we agreed on 118,35euro (incl. shipping).

X5 would have costed me about 60euro and it weighs 300gramm. The X0 has significantly less play mounted to a derailer hanger. The X5 is good enough for 9-speed but I think I will need better quality for a 10-speed system. Together with a weight reducion of a third, I think I made a pretty good deal. A derailer can last very long in a velomobile and then you'd better have one that shifts reliably.